Saint Raphael, terror of demons, exterminator of vices, health of the sick, our refuge in all our trials, guide of travelers, consoler of prisoners, joy of the sorrowful, filled with zeal for the salvation of souls, whose name means God heals, lover of chastity, Pray For Us!

Saint Raphael,
terror of demons, exterminator of vices, health of the sick, our refuge in all our trials, guide of travelers, consoler of prisoners, joy of the sorrowful, filled with zeal for the salvation of souls, whose name means God heals, lover of chastity,
Pray For Us!

The name of this archangel Raphael (God has healed) does not appear in the Hebrew Scriptures, and in the Septuagint only in the Book of Tobias. Here he first appears disguised in human form as the travelling companion of the younger Tobias, calling himself “Azarias the son of the great Ananias”. The story of the adventurous journey during which the protective influence of the angel is shown in many ways including the binding “in the desert of upper Egypt” of the demon who had previously slain seven husbands of Sara, daughter of Raguel, is picturesquely related in Tobit 5-11, to which the reader is referred. After the return and the healing of the blindness of the elder Tobias, Azarias makes himself known as “the angel Raphael, one of the seven, who stand before the Lord” (Tob., xii, 15. Cf. Apoc., viii, 2). Of these seven “archangels” which appear in the angelology of post-Exilic Judaism, only three, Gabriel, Michael and Raphael, are mentioned in the canonical Scriptures. The others, according to the Book of Enoch (cf. xxi) are Uriel, Raguel, Sariel, and Jerahmeel, while from other apocryphal sources we get the variant names Izidkiel, Hanael, and Kepharel instead of the last three in the other list. Regarding the functions attributed to Raphael we have little more than his declaration to Tobias (Tobit 12) that when the latter was occupied in his works of mercy and charity, he (Raphael) offered his prayer to the Lord, that he was sent by the Lord to heal him of his blindness and to deliver Sara, his son’s wife, from the devil. The Jewish category of the archangels is recognized in the New Testament (I Thess., iv, 15; Jude, 9), but only Gabriel and Michael are mentioned by name. Many commentators, however, identify Raphael with the “angel of the Lord” mentioned in John 5. This conjecture is base both on the significance of the name and on the healing role attributed to Raphael in the Book of Tobias. The Church assigns the feast of St. Raphael to 24 October. The hymns of the Office recall the healing power of the archangel and his victory over the demon. The lessons of the first Nocturn and the Antiphons of the entire Office are taken from the Book of Tobias, and the lessons of the second and third Nocturns from the works of St. Augustine, viz. for the second Nocturn a sermon on Tobias (sermon I on the fifteenth Sunday), and for the third, a homily on the opening verse of John, v. The Epistle of the Mass is taken from the twelfth chapter of Tobias, and the Gospel from John 5:1-4, referring to the pool called Probatica, where the multitude of the infirm lay awaiting the moving of the water, for “an angel of the Lord descended at certain times into the pond; and the water was moved.And he that went down first into the pond after the motion of the water was made whole of whatsoever infirmity he lay under”. Thus the conjecture of the commentators referred to above is confirmed by the official Liturgy of the Church. 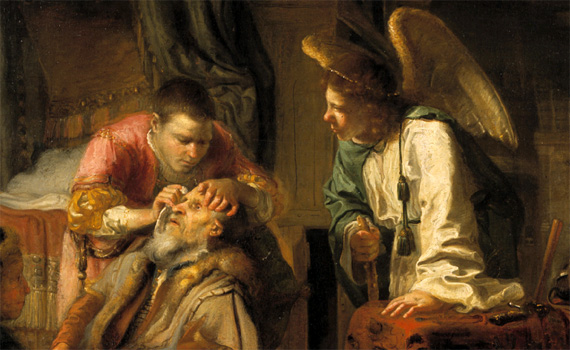 St. Raphael is one of seven Archangels who stand before the throne of the Lord. He was sent by God to help Tobit, Tobiah and Sarah. At the time, Tobit was blind and Tobiah’s betrothed, Sarah, had had seven bridegrooms perish on the night of their weddings. Raphael accompanied Tobiah into Media disguised as a man named Azariah. Raphael helped him through his difficulties and taught him how to safely enter marriage with Sarah. Tobiah said that Raphael caused him to have his wife and that he gave joy to Sarah’s parents for driving out the evil spirit in her. He also gave Raphael credit for his father’s seeing the light of heaven and for receiving all good things through his intercession. Besides Raphael, Michael and Gabriel are the only Archangels mentioned by name in the bible. Raphael’s name means “God heals.” This identity came about because of the biblical story which claims that he “healed” the earth when it was defiled by the sins of the fallen angels in the apocryphal book of Enoch. Raphael is also identified as the angel who moved the waters of the healing sheep pool. He is also the patron of Catholic singles, of happy meetings, of nurses, of physicians, the blind, and of travelers. His feast day is September 29th

One of the three archangels mentioned in the Bible by name is St. Raphael. His name means  “God heals” and he is the patron of travelers, but did you also know that he is the patron saint of Catholic singles, happy meetings, and healings? That is why CatholicMatch is under the patronage of St. Raphael the Archangel. In the Liturgical calendar for the extraordinary form, today is the feast day for St. Raphael. In honor of this mighty archangel that brings lovers together I’d like to take a deeper look at his life. Within the Book of Tobit, St. Raphael is sent from God to help the healing of not only Tobias’s father, but also the deliverance of Sarah from the devil… Read More

In an effort to spread devotion to this miraculous saint (Raphael) we have launched StRaphael.net with a focus on prayers, devotions, photos, Catholic singles and other things related to Saint Raphael the Archangel.

Join the largest Catholic dating site in the world—where thousands of Catholics find their spouse.